EDMONTON, ALBERTA – October 11, 2022 -- Grizzly Discoveries Inc. (TSX-V: GZD; Frankfurt: G6H; OTCQB: GZDIF) ("Grizzly" or the "Company") is pleased to announce that, on October 9th, 2022, it signed an option agreement with Mr. Daniel Hurd of Peachland, British Columbia (BC), Canada to purchase the mineral rights to 317 hectares in seven (7) mineral claims in the Greenwood area, BC including the historical Silver(Ag)-Gold(Au)-Lead(Pb)-Zinc(Zn) Midway Mine and the Picturestone Quarry, which are about 4 km northwest of the town of Midway in the Kettle River Valley area of BC. The Midway – Picturestone mineral claims are strategically located within the Company’s Greenwood land holdings and in particular the Company’s Midway lands.

The Midway Mine and the Picturestone (aka Picture Rock) Quarry area have seen intermittent exploration and mining since the late 1800’s through to as recent as 2012. In the case of the historical Midway Mine, limited underground and open pit development has occurred. The Midway Mine and the Picturestone Quarry are situated within the “Midway Window”, a structural zone within the Toroda Graben exposing Late Paleozoic to Jurassic sediments, volcanics and intrusions, including the Knob Hill and Brooklyn formations, centered on an old thrust fault in a similar setting to the Golden Crown and Lexington Mine area near Greenwood, BC as displayed in Figure 1.

The Company’s Midway Lands have been a focus of exploration since acquiring lands in the area. The current status of historical and modern exploration by the Company is illustrated in Figure 1, with most of the recent work focused on lands to the west and southwest of the historical Midway Mine.

Prior owners and operators describe significant epithermal mineralization in the form vertical polymetallic sulphide veins enriched in pyrite, arsenopyrite, galena, sphalerite and stibnite, quartz veins and significant alteration at the Midway Mine and Picturestone Quarry. The Midway Mine is spatially associated with a northeast trending gold (Au), silver (Ag), lead (Pb), zinc (Zn) and arsenic (As) soil geochemical anomaly that is approximately 300 m in length and 100 m in width in the area of the Midway Mine1. Historical trench sampling yielded 2.8 grams per tonne (g/t) Au and 218 g/t Ag over a 4.5 m interval in chip/channel sampling at the Midway Mine1. Limited drilling with some significant intercepts was carried out in the 1980’s at the Midway and Picturestone prospects.

The most recent work in 2012 resulted in a recommendation of ground geophysical surveys, additional soil sampling and drilling. The work was never completed.

Under the terms of the option agreement, the Company may earn a 100% interest in the mineral rights by paying $15,000 in cash and 150,000 shares by the 3rd Anniversary Date of the agreement. Mr. Hurd retains a 1% Net Smelter Returns Royalty (NSR) and the right to any quarriable industrial rocks.

The Company has recently completed Phase 1 drilling on the Dayton and Motherlode North prospects and will provide an update on the drilling in the near future. 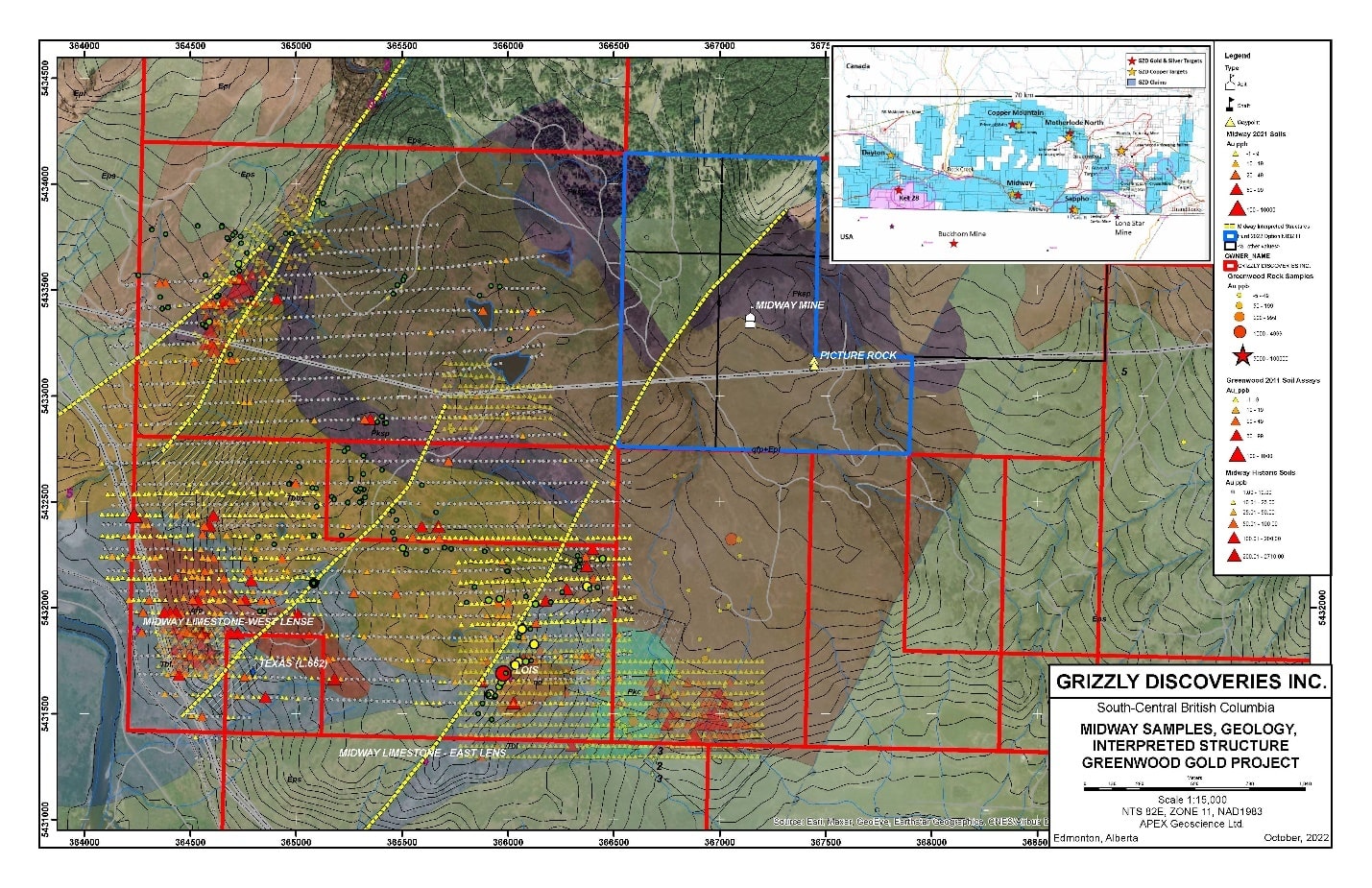 Brian Testo, President and CEO of Grizzly Discoveries stated “We are excited at our first deal with prospector Dan Hurd and we look forward to working with him as we continue our exploration efforts at Midway and in particular the underexplored Midway Mine, a prospect with high grade gold and silver potential that we have had our eyes on for a number of years! We view the acquisition of the Midway and Picturestone prospects as a good quality strategic acquisition to our current significant land holdings in the Greenwood District.”

The technical content of this news release and the Company's technical disclosure has been reviewed and approved by Michael B. Dufresne, M. Sc., P. Geol., P.Geo., who is the Qualified Person as defined by National Instrument 43-101 Standards of Disclosure for Mineral Projects.

Grizzly is a diversified Canadian mineral exploration company with its primary listing on the TSX Venture Exchange focused on developing its approximately 66,000 ha (approximately 165,000 acres) of precious and base metals properties in southeastern British Columbia. Grizzly is run by highly experienced junior resource sector management team, who have a track record of advancing exploration projects from early exploration stage through to feasibility stage.

On behalf of the Board,