EDMONTON, ALBERTA – May 13, 2020 -- Grizzly Discoveries Inc. (TSX-V: GZD; OTCQB: GZDIF; Frankfurt: G6H) ("Grizzly" or the "Company") is pleased to provide a gold sector review that is supportive to Grizzly Discoveries and the potential to grow the market capitalization of the Company due to its Precious Metals properties in southeastern British Columbia, Canada. The physical gold price has performed very well in recent years. In fact, the yellow metal is up by around 35% over the past year alone, while the S&P 500 and other major averages are down by around 15% or more since their all-time highs were reached earlier in the year. Grizzly has work programs planned and anticipates news with results during Q3 and Q4 of 2020. For more Company information click the following - Grizzly Presentation.

Gold is up substantially over the last year, reaching seven (7) year highs. But we're still very likely in the early stages of this secular gold bull run. The catalysts for gold price acceleration include: 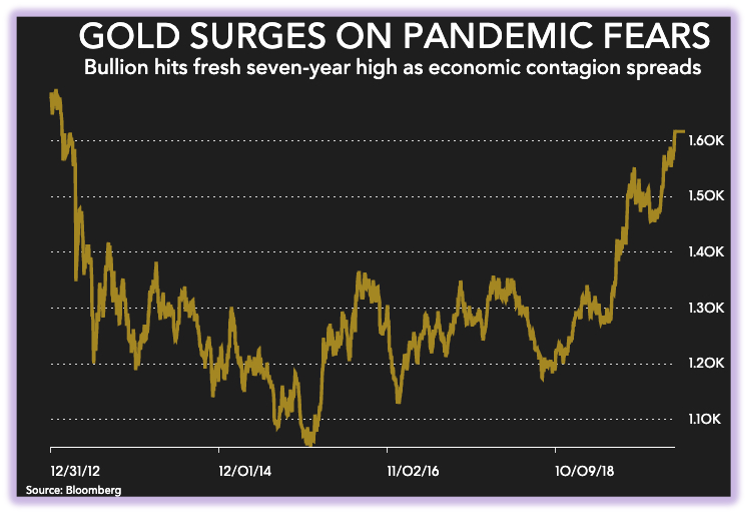 USA Fed’s Unprecedented Stimulus
The Federal Reserve is in the process of creating an unprecedented amount of new money to deal with the fallout from the coronavirus/CV epidemic. The Fed has announced several multi-trillion dollar monetary programs designed to provide massive liquidity to markets to prevent the economy from collapsing. Coupled with Fed stimulus, the Government is coming out with bailout programs to inject capital into various segments of the U.S. economy as well.

There is only one problem: the U.S. government doesn’t have any money. So all these trillions are coming from the Fed. The Fed can simply digitize all the dollars it needs to buy Treasuries, corporate bonds, junk bonds, or just about any other kind of debt it wants to inject immense capital into the financial system.
The problem is that this kind of monetary policy is bound to significantly dilute the U.S.’s monetary base. We can already see that the monetary base has increased to around $3.9 trillion and is floating about on par with prior all-time highs. However, the Fed’s printing presses are just getting started, and the eventual post-CV monetary base could be around $10 trillion or more.
Now, we know that the U.S. dollar is no longer officially backed by gold. In fact, it is not backed by anything tangible anymore. Nevertheless, if we trace back the monetary base, we can see that despite the decoupling from the gold standard in 1971, it correlates extremely closely with the price of gold.

From 1971 to now, the monetary base has increased from about $80 billion to roughly $3.9 trillion, an increase of around 4,775%. During this same time frame, gold has surged from about $36.56 all the way up to around $1,720, a percentage increase of roughly 4,600%. So, we can see that despite losing its “official” correlation, the two (gold price, and monetary base expansion) are very much correlated to this day.

This monetary expansion likely means substantial higher prices for gold going forward as well. If we use a $3.9 trillion to $10 trillion formula, we see that this about a 156% increase. Thus, if we apply this same percentage to gold, we could be looking at gold prices of around $4,400, possibly within 2-3 years.

Thus, either calculation we use provides us with a plausible gold price target of around $4,500, which could be achieved over the next 2-3 years.

While we are discussing gold, it seems appropriate to discuss the U.S.’s unbelievable debt burden as well. As I look at the debt clock right now, I see that the U.S. national debt is at a staggering $24.7 trillion. Federal spending is utterly out of control, $6.67 trillion relative to just $3.56 trillion in tax revenue. This leaves with an actual Federal budget deficit gap of over $3 trillion, far higher than at any time throughout history. Not surprisingly, the U.S. now sports one of the highest debt to GDP burdens in the world. U.S. Federal debt to GDP is now at 115%, and total debt to GDP is at a staggering 130%.

The Takeaway on the Debt
The takeaway on the debt is clear, this is a huge problem. First, we see that the U.S. is spending far more than it is taking in in revenues. $3 trillion deficits are not sustainable without grave side effects for the U.S. economy. Granted, part of the monstrous deficit is due to the CV outbreak, but even without it the U.S. is used to running up trillion plus dollar deficits almost regularly.

How to deal with all this debt?
Well, there are no real silver bullets, just like there aren’t any for the CV. The debt is just something that we’re going to have to deal with, and it will likely be very hard and painful. First, the huge deficit may require tax hikes to bring the budget back closer to balance. Second, we’re probably never going to see the benchmark rate go much above zero in the future as this would mean higher rates and higher services payments on the debt.

Furthermore, the Fed will likely need to continue some dose of QE on a perpetual basis to create artificial demand for U.S. Treasuries so that rates can remain extremely low indefinitely. Also, the U.S. is not likely to produce any meaningful economic growth in the future due to the crushing debt. If 3% was considered good or normal GDP growth in the past, 1-2% may be considered good GDP growth in the future. Low growth, low rates, continuous QE, likely higher inflation; this is the ideal economic environment for gold. Therefore, the debt image also suggests that we will probably continue to see gold prices balloon into the future.

The Inflation, Interest Rate Dynamic
While we may see a temporary negative adjustment to inflation due to the CV, inflation will very likely come back in a big way going forward. The seemingly limitless money printing that is occurring today should filter through to the real economy in the future. We might not see or feel all the dollars entering the monetary system right away, but we will very likely see and feel the presence of much more fiat currency in the future.

How will we see this?
We will see and feel monetary debasement through inflation, and generally higher prices on goods and services. With higher prices on goods and services employers may need to raise wages, and the overall minimum wage may be elevated to suit the “new normal” economic reality as well. This could lead to even higher prices, that may intern lead to even more Fed or government stimulus.
While we are likely to be confronted with a higher inflation atmosphere, we will probably witness a very low interest rate environment at the same time. We see that due to our massive national and overall debt burden the economy will not be able to sustain any growth in a higher interest rate climate. Thus, extremely low rates for longer, or possibly perpetual (much like Japan), seems like the most probable outcome going forward.

A conservative view on future inflation growth is 2-3% in my view. It could conceivably shoot up much higher due to all the dollar and fiat printing in general that is going on. At the same time, interest rates are at around all-time lows, and likely only headed lower longer-term in my view.

Let’s take the current rates even. Right now, I’m looking at Treasuries. The 5-year is at 0.385%, the 10-year is at 0.623%, and the 30-year is at just 1.2%. We know that gold essentially competes with Treasuries, CDs, and other high rated bonds in the safe-haven asset category. So, if inflation is at around 2-3% or higher, it essentially makes no financial sense to invest your money in Treasuries, low yield bonds, CDs, or keep it in cash, because in these assets you are receiving a negative yield once adjusted for inflation.

Therefore, gold will likely experience higher demand going forward as it is the ultimate inflation hedge, and appears to be the top safe-haven asset in a mild/moderate to high inflation - low interest rate environment.

About Grizzly Discoveries Inc.
Grizzly is a diversified Canadian mineral exploration company with its primary listing on the TSX Venture Exchange with 67.1 million shares issued, focused on developing its precious and base metals properties in southeastern British Columbia.  The Company holds, or has an interest in, over 156,000 acres of precious-base metal properties in British Columbia, Canada.

On behalf of the Board,
GRIZZLY DISCOVERIES INC.